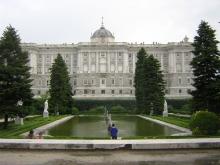 Greetings, fellow West Prusetanians! We here at the National Newsletter Service are overjoyed that you have decided to purchase this most recent update about your beloved royal family. As always, the NNS has dedicated its most astute investigative journalists to produce a newsletter of unparalleled accuracy and access to even the highest halls of our country's leadership. Without further ado, here's what our heads of state have been up to recently.

King Bertrand Wrothead III has been busy planning the victory parade for East Prusetania's inevitable defeat at the hands of our very capable army. Though the war has been raging for ten glorious years, it is the will of the King that our noble soldiers get a much-deserved rest and that the people of East Prusetania be given a period of recovery after such an extensive campaign of shame and loss. Fear not, King Bertrand has assured us that there is absolutely no chance that the Eastern dogs will use this gap in hostilities to launch their own assault. If they could not break our lines in a decade of fighting, they surely will not be able to successfully cross the boarder into our great nation. The parade is still in the early stages of development, but the King has indicated that at least seven elephants will be involved.

Queen Constance is adjusting to married life quite well. She reports that the royal palace already feels like home despite the fact that she grew up in the modest Vegetable District of our grand capitol. When asked whether or not she feels uneasy about the significant difference in age between the King and herself, her 19-year-old eyes glimmered and she said that the years of experience she lacks compared to our generous monarch are of no concern when love abounds.

Princess Grace continues to launch flaming marble busts of Queen Constance from the window of her suite in the palace, an act the Royal Guard assures us is another one of her performance art projects and not, as Grace has previously stated, an expression of anger and rebellion at being forced to bow to a mother who is seven years younger than her.

Duke Emmerich Wrothead sends his regards from his villa on the coast where he has captured and/or killed a record number of freshwater whales. The harpoons he uses will be available at a charity auction next month.

Congratulations to Prince Nathaniel on the recent conquest of his 100th lover. Emily Kiliver of West Prusetania Boarding School had the honor of sullying the sheets of the princely bed as 99 maidens, matrons, young huntsmen and a variety of foreign-born palace servants have before her. For her contribution to this landmark occasion, Ms. Kiliver was awarded a delightful balloon arrangement and a gift certificate to the Imperial Theatre for a show in the upcoming season.

Brownie the Wrothead family hound has been granted a stay of execution for his attempt to commit treason against the nation by relieving himself upon a carpet depicting the flag of West Prusetania. The King's counsel deemed the difference between an actual flag and a woven depiction of the flag sufficient to justify exile rather than death. Brownie shall be escorted to the northern boarder and handed over to the same mercenaries who currently care for the disgraced former queen, Abigail.


Question of the Week: Religious Tolerance

Meditate, share haiku, and simplify your life with all things Zen

We Support
Climate Activism
Click to reach the League of Conservation Voters.
Conversation Processing Intelligence™ beta website!
Click here to visit the hub of the Klat Network.
This site is part of the Klat network of blogs, forums, and communities.